A Brief History of PRT—Dedicated to our Patrons 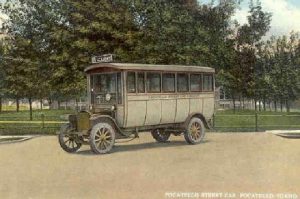 Privately operated rubber-tired motorized Streetcar service was operated in the Pocatello area at least as early as World War I (Circa 1917), with that type of conveyance plying the streets between the city’s downtown and The Academy (Now Idaho State University) and other locations. These early beginnings of public transit in Pocatello expanded to significant private public bus service in succeeding decades with the costs of capitalization and operations being met through inexpensive fares. Private automobile ownership was not what it is today and the bus services thrived. However, by the mid 1960’s this situation began to change with most privately owned intra-city public bus services in the United States no longer financially sustainable.

Pocatello’s privately owned bus services pretty much went out of service before 1965 and there would be a period of some fifteen years before any regularly scheduled fixed-route public transit system would be seen on the streets of Pocatello. 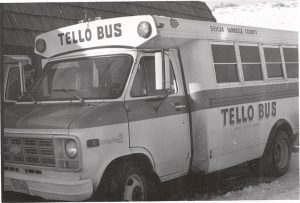 Pocatello Regional Transit (PRT), as it is known today, originated with the South Eastern Idaho Community Action Agency’s (SEICAA) creation of a targeted and limited door-to-door service for senior citizens in 1972. This one bus system, using an old surplus army vehicle, was known as Tello Bus. Throughout the 70’s the service capability and area expanded to include senior bus service in Pocatello and some areas of Bannock County. Title IIIB, state senior citizen transportation funding along with Bannock County, City of Pocatello and SEICAA financial assistance represented the operational and capital foundation until 1978. This was also the year that the system was able to extend service to include persons with disabilities regardless of age.

Tello Bus became Urban Transit in 1980 (subsequently called Pocatello Urban Transit–PUT) with a loop opposed loop fixed route service for the general public added to its door-to-door services for seniors and persons with disabilities. In 1982, in an action responding to the 1980 census which made Pocatello a small urbanized area, the City of Pocatello assumed responsibility for the administration and operations of the transit system.

Also in the late 1970’s and early 1980s, UMTA (Urban Mass Transportation Administration, later called FTA—Federal Transit Administration.) began to provide some funding assistance for rural public transit. This policy change greatly assisted the local transit system in making it possible to serve the broader general public needs in Pocatello and the rural areas. After 1982, when Pocatello became a small urban area, the funding assistance was separated for the small urban area and the rural areas of service. Pocatello Urban Transit (PUT) underwent a final name change in the late 1980’s to the system name of Pocatello Regional Transit (PRT); reflecting its return to rural service, expanded urban fixed route service, and the inclusion of routes wholly serving the Idaho State University campus. 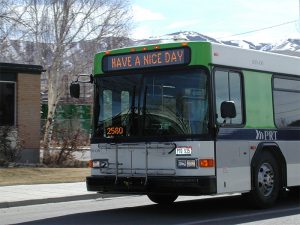 Even though It was always a financial challenge for PRT to survive and flourish without any dedicated state funding to assist the City and rural areas in the provision of public transit, the system continued to grow while carefully husbanding limited resources. This included the use of used vehicles for the fixed route until the first new buses were bought with Stripper Well funds match and UMTA funds in 1988. Thereafter, buses were able to be purchased including the acquisition of new 30’ and 35’ buses for fixed route service. Today, PRT operates 33 buses throughout the service area, consisting of 10 fixed-route buses, 7 demand-responsive vehicles in Pocatello-Chubbuck and 16 small buses in rural service. All routed buses and vehicles serving persons with disabilities have ADA accessible lift/ramp and features.

Acquiring and maintaining administrative and maintenance facilities has historically presented a challenge as well. The old Greyhound Building was used for many years as a transit downtown transfer and administrative facility as well as a (circa 1920’s) garage on the East side that PRT shared with other city departments for a number of years–it has long since seen its best years. In an exciting development, thanks to FTA and the City of Pocatello, a project some six years in the making is about to come to fruition with the opening in July 2014 of new transit Administration and Maintenance facilities on South 5th.

With a compelling history behind and a bright future ahead we wish to extend appreciation to the Federal Transit Administration, the Idaho Transportation Department and the City of Pocatello for their vital support of PRT. We note also the support of Pocatello Mayors and City Councils through the years. Our appreciation extends as well to Idaho State University, Bannock County, the City of Chubbuck and leadership in the rural communities in our service area.

Now in over 40 years of operation we particularly acknowledge you, our patrons, for the support in making Pocatello Regional Transit your full -service public transit system!